Início > Tell the world about them. Now!

Tell the world about them. Now!

In 2001, the photographer Rune Eraker went to Colombia to document the conditions under which political prisoners were detained. When the guards weren’t looking, a prisoner held him a note: “Tell the world about us”.

Amnesty International was founded after the publication of an article called “The forgotten prisoners”, in 1961, that urges for collective action to bring to light cases of people worldwide who were unfairly detained.

The art of Rune Eraker is, in this sense, strictly connected with Amnesty International’s mission.
Almost 60 year later, we continue to work daily so that everyone, everywhere, can be free and equal in dignity and rights. Today, we are over 7 million people who joined this movement and chose to take action for human rights, freedom and justice. 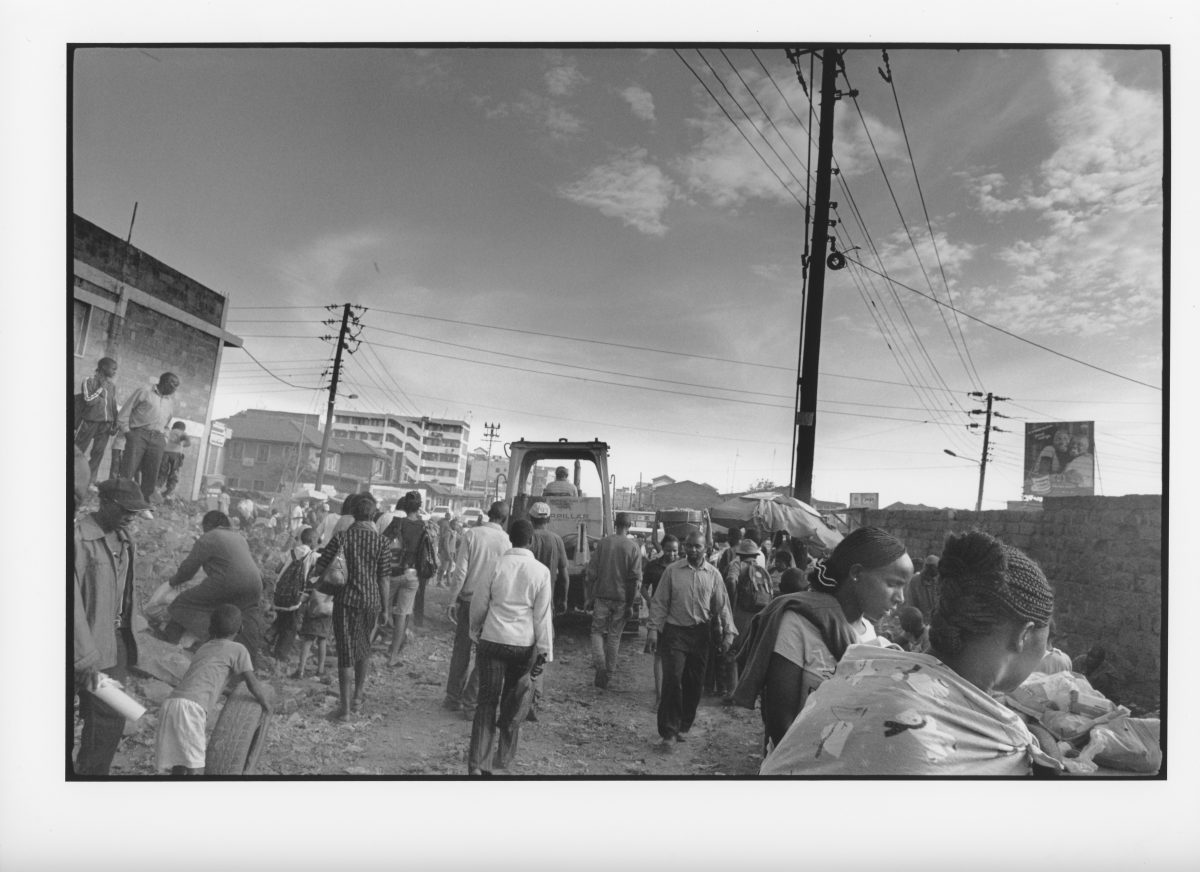 © Rune Eraker
Kenya, 2015: In the dust left behind by the bulldozer, people wander around a secure future in sight. They are going to build a new road, banks and shopping centres here.
Some people have been here for 50-60 years and haver never lived anywhere else. They are often left destitute, without rights, a home or compensation. 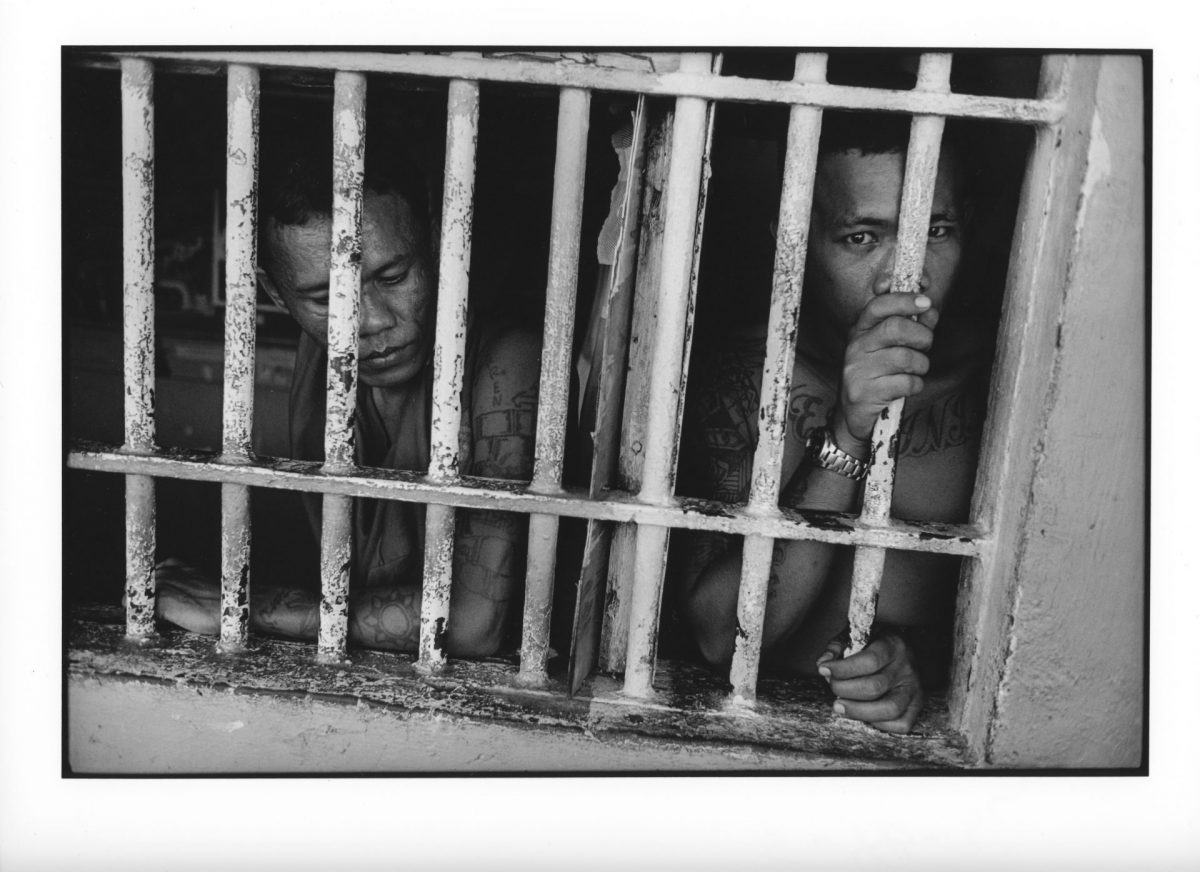 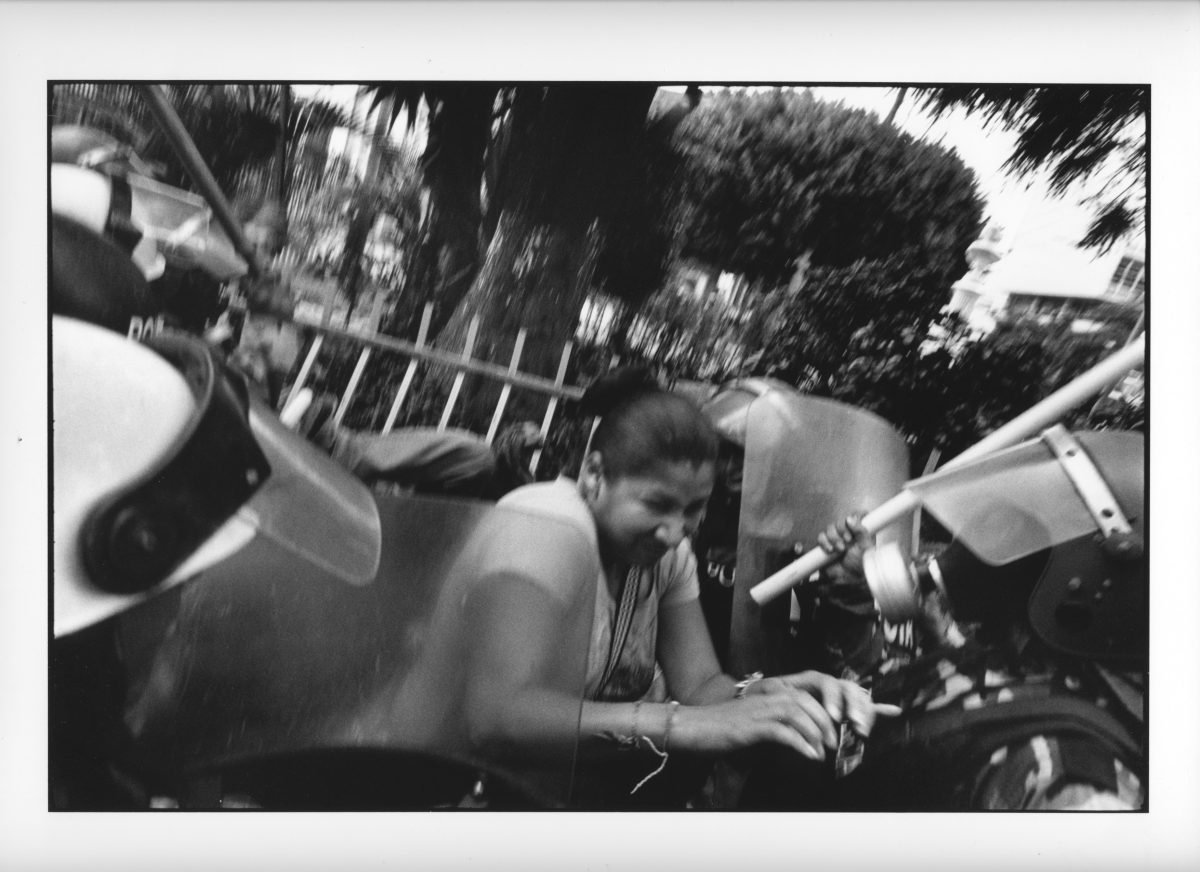 © Rune Eraker
Honduras, 2009: A female demonstrator is beaten up by riot police in the capital, Tegucigualpa.

Visit “Tell the world about us” photography exhibition about lost liberty and human dignity, at the Portuguese Center of Photography (CPF) in Oporto until October 6th, or join bellow. 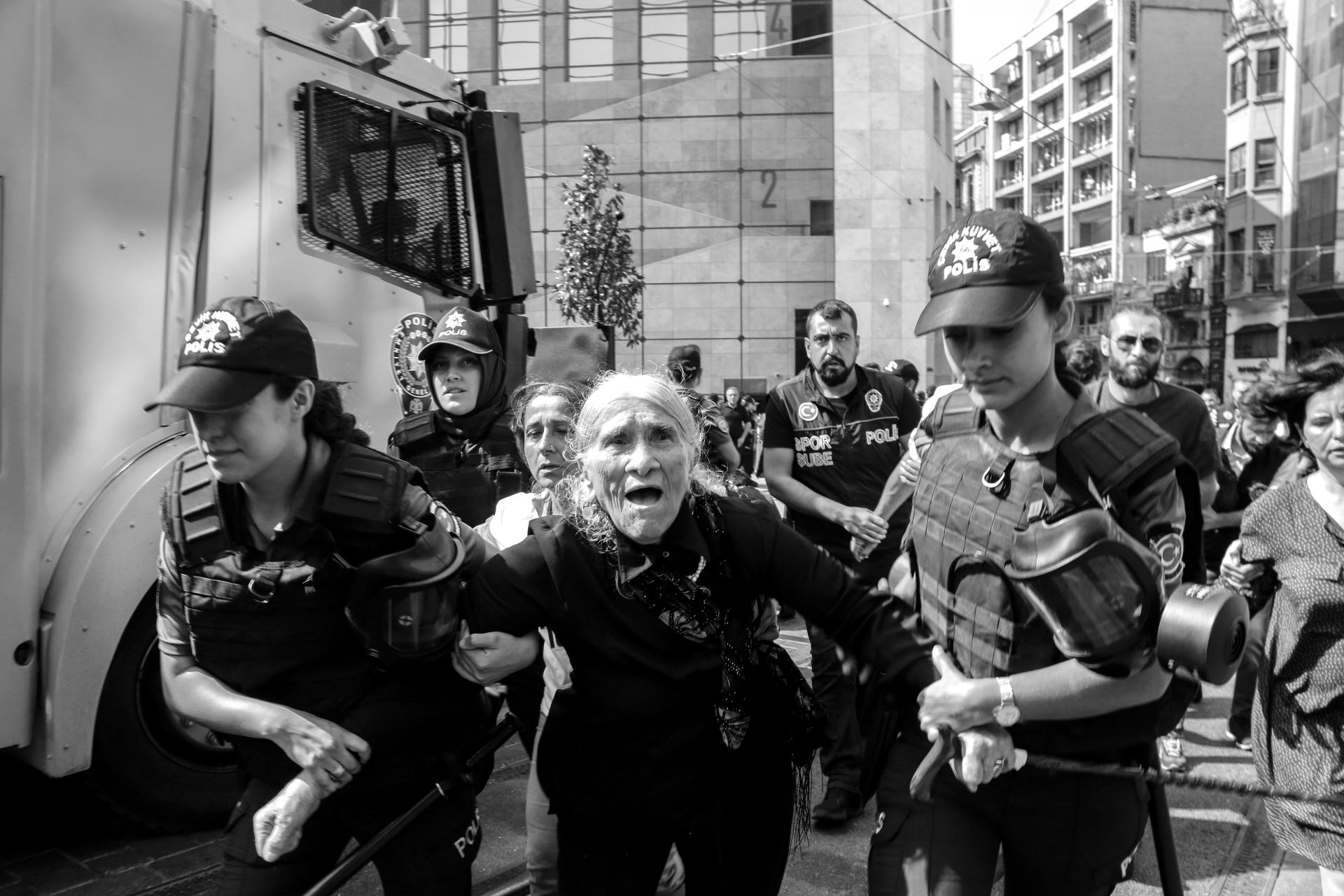 SATURDAY MOTHERS’ MUST BE ALLOWED TO PEACEFULLY PROTEST [Turkey]

On August 25th 2018, police in Istanbul used tear gas, plastic bullets and water cannons to disperse a peaceful protest of mainly women, some of whom in their 80s. Known as ‘Saturday Mothers’, the women have been holding a peaceful vigil in memory of their loved ones since the mid-1990s, protesting against the enforced disappearance of their relatives whose fate they seek to find out.

For most families the circumstances surrounding the disappearances of their relatives are unknown, even whether if they are dead or alive. Those responsible have never been brought to justice.

The protests are banned since August 25th 2018, but these relatives are determined to continue to protest, putting themselves at risk. Stand with us and urge the Turkish authorities to allow these protests to take place in safety.

In February 2011 you met with 12 relatives of some of the hundreds of people disappeared.

At that meeting, you made a promise that your government would start work on enforced disappearances, one of the most serious human rights violations in Turkey.

Now, the families are still demanding truth and justice for their loved ones so brutally taken from them in the 1980s and 1990s. Now, their weekly peaceful vigil has been banned and dozens among them have been ill-treated and detained. Turkey has still not signed the International Convention for the Protection of All Persons from Enforced Disappearance.

I call on you to make good on your promise from 2011, starting with lifting the ban on the Saturday Mothers’ peaceful weekly vigil and sign and ratify the International Convention. Bringing perpetrators of past enforced disappearance to justice is the best way to ensure this crime is never committed again against anyone in Turkey. 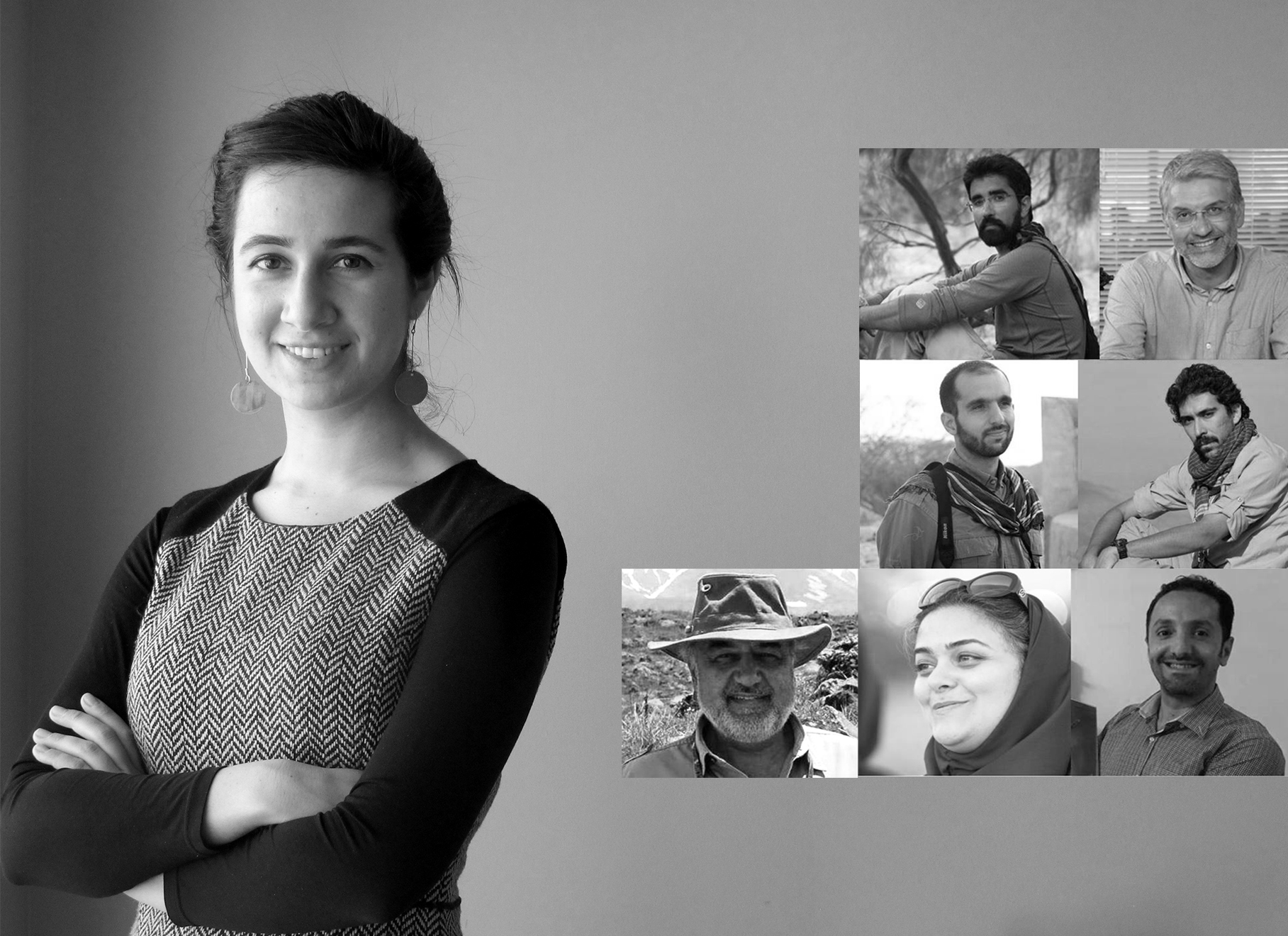 Eight conservationists in Iran have been accused of espionage after using cameras to track endangered species. Following an unfair trial, they could face death penalty or more than a decade in prison. There is evidence that they were subjected to torture and other ill-treatment in order to extract forced “confessions”.

They had been conducting research into Iran’s endangered animals, including the Asiatic cheetah and Persian leopard.

In October 2018, the conservationists were formally charged: four of them with “corruption on earth” (efsad f’il arz), three with espionage and one other with “co-operating with hostile states against the Islamic Republic” and “gathering and colluding to commit crimes against national security”.

Their “confessions” should not be accepted, and they should all be release immediate and unconditionally.

Eight conservationists who have been detained in Tehran’s Evin prison since their arrests in January 2018 are awaiting a court verdict following a grossly unfair trial.

Niloufar Bayani, Houman Jowkar, Morad Tahbaz and Taher Ghadirian have been charged with “corruption on earth” (efsad f’il arz) and could be sentenced to death. Amirhossein Khaleghi, Sepideh Kashani and Abdolreza Kouhpayeh have been charged with espionage and could face up to 10 years in prison. Sam Rajabi has been charged with offences including “co-operating with hostile states against the Islamic Republic” and could face up to 11 years in prison. Without providing any evidence, the authorities have accused them of using scientific and environmental projects as a cover to collect classified military information. The charges against the scientists, who are linked to the Persian Wildlife Heritage Foundation, stem from their research activities on endangered species. Furthermore, some of them displayed signs of physical torture, with broken teeth and bruising on their bodies in order to obtain “confessions”.

I urge you to release all eight conservationists immediately and unconditionally, as they are prisoners of conscience, detained solely for peacefully exercising their rights to freedoms of expression, association and assembly, including through their work protecting Iran’s endangered wildlife. Please ensure that, pending their release, they are protected from torture and other ill-treatment and are given regular access to their families and lawyers of their own choosing. We live in a time where fear, division and demonization gain ground. Worldwide, the “us against them” narratives are being used to create a feeling of collective guilt, regardless political and social contexts. As such, those who dare to defend human rights are currently under attack at an increasingly number of countries and at an alarming rate.

Take action with us and add your name so that Portuguese authorities publicly acknowledge the fundamental role that human rights defenders play for a fairer society. 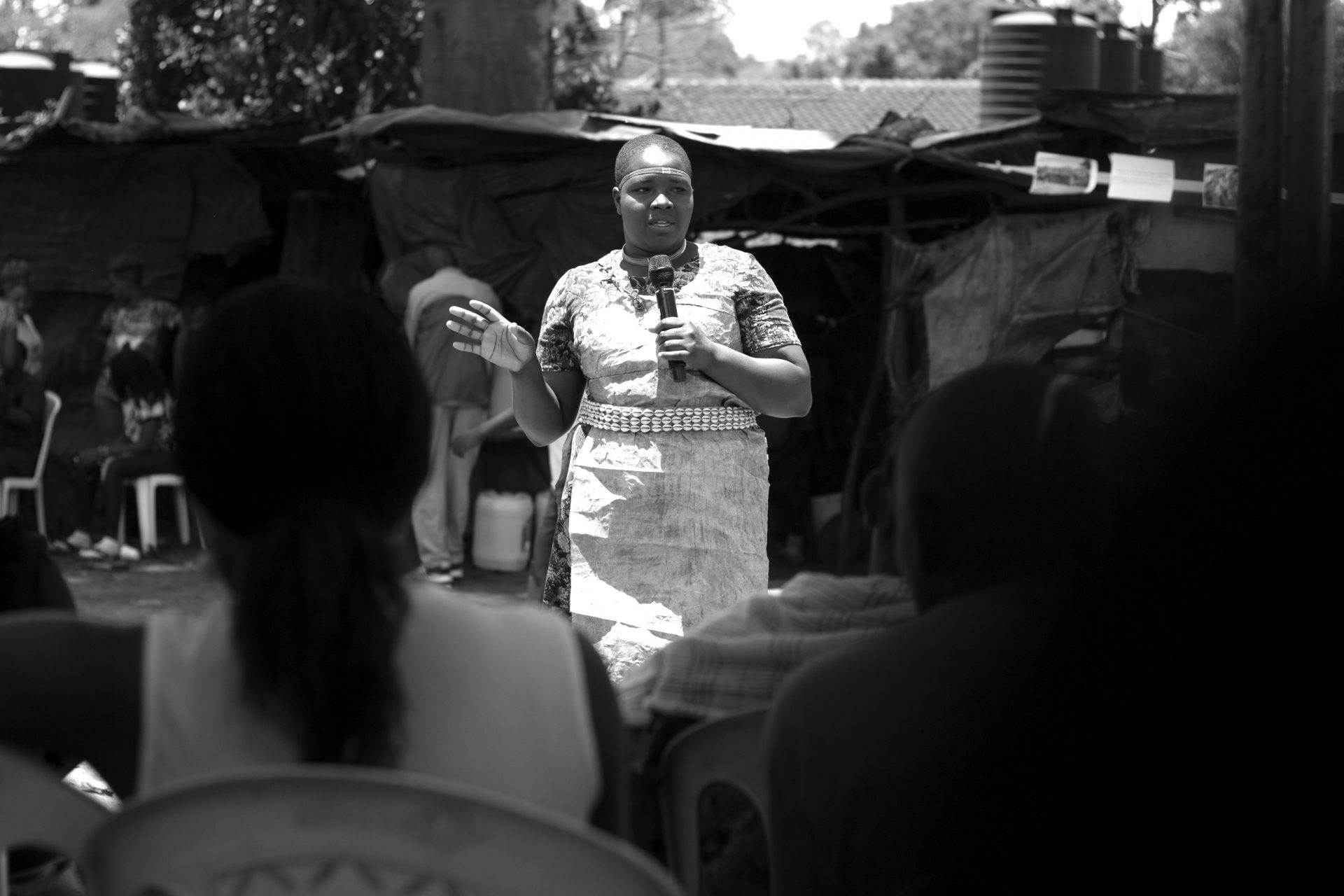 The Deep Sea Community in Nairobi, Kenya is once again at imminent risk of forced evictions. In this community there are close to 12,000 residents.

Since 2009, the Deep Sea community has been under the threat of forced eviction, triggered by the planned construction of the ‘Missing Link’ road by Kenya Urban Roads Authority (KURA) with the funding of the European Union (EU).

On 1 February, the Deputy County Commissioner informed residents of the informal settlement that they had four days to vacate their homes to pave way for the EU funded road. Failure to which he threatened that the government would forcibly take over the land.

More than two thousand residents of Deep Sea informal settlement in Westlands, Nairobi are at risk of imminent forced evictions. The residents told Amnesty International that on 1 February, the Deputy County Commissioner (DCC) of Westlands Subcounty together with officers from other stations, eight of whom were armed, visited the informal settlement. The DCC informed the residents that they had four days to vacate the area designated for a European Union (EU) funded road construction project, or the government would take the land by force.

The Deep Sea community has faced forced evictions and multiple threats of forced evictions since 2009. The community representatives leading the negotiations are receiving alleged death threats from a Nairobi county official. They were told if they did not pull out of the of the negotiations and vacate the road reserve, “Amnesty would collect bodies in Deep Sea and make noise over bodies instead of houses”.

In light of the above, I call on you to: